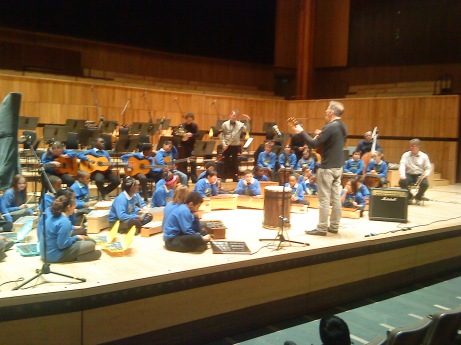 This has to have been the most successful schools music project I’ve been involved in. The Year 6 class at the school where I work were chosen to work with members of the London Philharmonic Orchestra in a composition project that involved five classical musicians, a highly skilled workshop leader and thirty-eight ten and eleven year olds. The project was inspired by Sibelius’ 5th symphony and featured the children’s compositions inspired by that theme.

The project was funded by the London Philharmonic Orchestra and Excellence in Cities – big thank you to Joe Rea of Southwark. There were six whole days of workshops from December culminating in a concert at the Royal Festival Hall on the main stage prior to the LPO’s concert in February. The students also had an opportunity to attend a full orchestra rehearsal which they found quite exhilarating.

Why was this workshop so successful? I’ve seen many good jazz and gospel music projects in schools but this was undoubtedly the best. I think this was because the students got so much quality time with so many great musicians who made the effort even in the snow. Most education projects I’ve been involved in have featured one musician not six! The musicians were a friendly and relaxed bunch who it was a pleasure to hang out with. They chatted amiably with the children, had high expectations and established a rapport with a the students. The leader, Paul Griffiths, has been involved in workshops for some time (and I’ve worked with him before) and he knows how to relate to students and treat them as individuals. I’ve not spent much time with orchestral musicians and it was a treat to hear them play so amazingly by ear, improvise, groove and play without a written note in sight. Credit must also be given to the wonderful staff team that work with these pupils and the headteacher who valued these creative workshops enough to devote a large amount of curriculum time to them.

The students heard how Sibelius was a Finnish composer in a Romantic style and they learned that that meant using nature as a starting point and rhapsodising on that. At that time it was snowing heavily and the kids wrote a song about this with help from Paul in editing the words and making the melodies but every musical decision at that stage was a group one. The pupils chose the dynamics, the instrumentation n each section and even dictated whether bassist George Peniston should bow or pluck. One musical section was quoted from Sibelius and other sections were created in a range of ways. An example of this would be where Paul gave one group of students the notes F,G,A,C and E and another group F, G, A, C and Db and asked each group (with the help of a musician) to come up with a melody using those notes. The melodies were then played sequentially and combined.

The musicians were free to come up with ideas – it wasn’t just the children and the musicians were adept at using questioning to develop the children’s musical conception and awareness and develop the themes. Most of the composition stage happened in small groups of 8 or 9 and pieces were arranged together as the whole group. Every instrument in the school was made use of: classical guitars, keyboards, piano, xylophones, glockenspiels, metallophones, chime bars, djembe drums and hand held percussion.

At the end of six whole days of workshops we had around 40 minutes of music including two songs, several compositions and a number of improvisations. It was then a ruthless job, falling mostly to Paul, to edit that down to around 15 minutes of music for the show. Once that was done, it was a case of playing through the piece enough for the children to commit the structure to memory. They learn fast!

A whole week after the final rehearsal we arrived at the Festival Hall for the show. The initial run-through in the afternoon demonstrated some rustiness and issues with missing beaters, nerves and suchlike but the second run-through was wonderful. The concert was great and it was lovely to sit back for once and listen to the children play. These children had very little experience learning musical instruments outside school but had proved themselves very musical indeed.

The wonderful musicians involved were:

You can hear the final performance here:

And an edited version here: