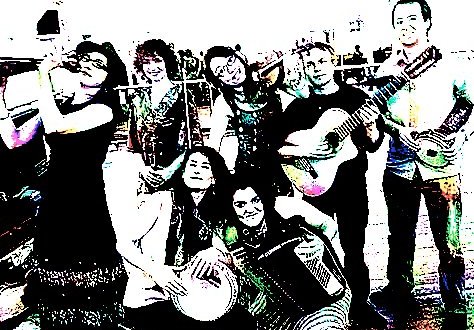 Located on Bishopgate near to Liverpool St Station, St Ethelburgas Centre for Reconciliation and piece has become known as a beautiful venue for world music in London.

The original St Ethelburgas was destroyed by the IRA bomb in 1993 – it was rebuilt as a multi-faith centre. It’s really a great venue and this should be a special night. I’ve been playing with Delicatessen for a while now and the gigs are a delight. Lots of music from the Balkan and Mediterranean area with beautiful tunes from Greece, Turkey, Bulgaria and other countries in the region – also with influences from Sephardic, Klezmer and arabic music.

Delicatessen gigs are quite intimate affairs: singer/accordionist Paressa weaves stories of the origin of the songs and charms the audience as does the interplay of the beautiful voices of Paressa, percussionist Duygu, and oud specialist Patricia. The melodies are beautiful and are framed in varying arrangements with the soulful violin of Mutsumi, Paressa’s free wheeling accordion, Patricia’s expressive oud and the pulse provided by Patrick and Duygu on darbucka, riq and various percussion. Jeremy’s guitar is such a harmonic and rhythmic rock and foundation I have a lot of freedom as a bass player.

Pakaw are also playing and are a special band indeed. Delicatessen’s character is partly former as it exists as a band with a majority of female musicians, Pakaw is all women and characterised by the harmonic and melodic possibilities provided by four great voices – Paressa and Duygu (again) with Katerina and Olympia as they range across beautiful songs from Greece, Turkey, the Mediterranean and the Black Sea. I’m certainly looking forward to seeing them play live and rumour is some collaborations between the groups might be in order.

Really hoping to see a few of you there. Entry is £12 for two high quality acts in a beautiful venue. Doors open at 6:45 and the music starts at 7:30.