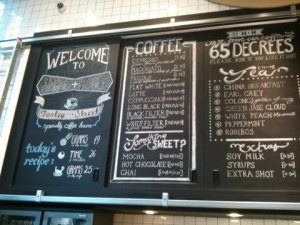 Much of the protests about the involvement of Tesco in funding Harris + Hoole have proved a bit of a storm in a teacup to be honest but it’s interesting to consider the impact the coffee chain might have.

My initial reaction to the idea was not positive I have to admit. I probably had an over-naive view of independent artisan coffeeshops. I also had (and have) a huge dislike of Tesco because of how I feel about the effects of their singularly profit-driven approach on smaller retailers, community and local shopping, farming, customer care, and the seeming promotion to customers of mediocre aspirations to low quality, highly packaged products. Do you know how many farm are owned (or in hock to) supermarkets nowadays?

Why then would I consider Harris + Hoole could be a positive force in coffee then?

The complexity of investment and ethics

Tesco do not own Harris + Hoole. I have been assured by the Tolleys (who previously developed their own minor chain of indies Taylor Street which continues to thrive) that Tesco merely invested. They do not control operations. They are said to own far less than the 49% quoted in the media. The Tolleys have the say on coffee beans, equipment, staff training and recruitment. Although my faith in this has been tempered slightly by H + H opening directly adjacent to Tesco stores, this working relationship appears not to be affecting the provenance or quality of the coffee. Andrew Tolley reassured me that Tesco do not control Harris + Hoole but provide investment. Basically it’s as simple as this: Tesco have a non-controlling investment stake. The only spanner in the works would come if Tesco offered a zillion pounds to buy a controlling share – but they could do this with any coffee chain, surely?

Anyway, let’s take a step back. Let’s look at some of the expensive fit-outs of recently opened London coffeeshops. Where does the money come from? Even think of more modest coffeeshops. They still require investment. The money come from silent partners, individual investors, banks and financiers. Do you really know who owns your local indie coffeeshop? Who is checking on the ethics of these investors? Who knows, some might have ethics even less popular than Tesco. What about the rent the cafes might pay to a landlord? Perhaps a landlord who is exploiting land ownership in an ethically questionable way. Why are we singling Tesco out?

It could be more relevant to criticise Harris + Hoole for being registered in Ireland, a move companies often exploit to reduce tax. Corporation tax is 12% in Irelend and 23% in the UK. They claim this is to facilitate global expansion but haven’t clarified exactly why or how.

Harris + Hoole are commited to using direst traded beans. This trading method is not perfect but is considered to be the most ethical for coffee producers, definitelty more so than certified Fair Trade or the open market. Union, who supply Harris + Hoole, have been at the forefront of the developemt  of direct trade. Imagine the genius of persuading Tesco to invest in a product traded in a manner that is considered one of the fairest to farmers. If Harris + Hoole can develop to challenge the major chains, that will result in an increase in the proportion of coffee traded in this methos. Andrew Tolley has confirmed to me that Harris + Hoole will always use ethically produced direct trade coffee.

Who are they competing whith

So far Harris + Hoole have focussed almost exclusively on the suburbs of London, apart from a few central London openings. Those more central branches have surprised me, that didn’t seem their focus. When I visited their London Bridge cafe though it was clear who they were competing with however. They were already drawing custom from the nearby Costa and Starbucks. And this is where I believe they aim to challenge. The service is chain-like (in a positive sense) and the consistency and uniformity definitely adds to that impresssion. They even compete by serving the larger milk based drinks too.

Just as the chains played a role in the 90s in preparing a coffee market for the indies, H +H can have  a role to play in raising public expectations of coffee quality and provenance. While the coffee I have had there has been a little variable there is no doubt it is hugely superior to the other chains and better than many independents. When I have had a subpar drink in their cafe it has been replaced straighaway. The areas Harris + Hooole have chosen have little in terms of reliable, high quality independent coffee. Few would argue with me that standards of coffee in Bermondsey and Crouch Hill desperately needed to improve. I’m ignoring for the sake of argument a small hatch that opens in Bermondsey only an hour or two a day or a walk to the superb Elliots or Flat Cap in Borough Market.

Let the independent coffeeshops respond in their way. Either by producing a quality that H + H can’t match, a personal service, an individual identity or by finding a market niche. Too many who have complained have been serving inferior coffee. Let the indies in Ruislip, Uxbridge, Crouch End and North Finchley respond.

The Dream of the Tolleys

Imagine having a dream of taking a great product to a wide audience, many completely unfamiliar with the range of tastes and the quality that is possible with that project. Andrew, Laura and Nick Tolley have had great success with their Taylor St Baristas chain since 2006, launching the career of some great baristas, training many in the industry, spearheading quality coffee in the City and reaching far off Richmond and Brighton. Tesco’s money allows the Tolley’s to develop that dream further and wider.

Given Andrew’s experience in the London School of Coffee, it’s not surprising that I have hopes that the staff training H+H provide could help fill a shortage of quality baristas in London. I have met more than a few skilled and passionate baristas who started their careers in Starbucks, so why not Harris + Hoole. It’s true that many have detected a variable amount of product knowledge among    H + H staff but there will be enough motivated people to help fill the shortage of quality baristas.

One criticism I have heard often is that Harris + Hoole pretend to be an independent when they are clearly not. It is true that a search of the Harris + Hoole website for the word ‘Tesco’ does not give any results but then which coffee company’s website does list their investors on their home page? The shops look like a chain to me and indeed the uniformity and consistency they aim for is exactly that of a chain. Harris + Hoole have made no secret of their investors from day one.

Over to you. What do you think? Leave a comment below.

10 thoughts on “Why Harris + Hoole are good for independent coffee”