With the news of the closure of Damson, Fred and Frann, and Salt this week I wondered how many of the third wave/independent/speciality coffeeshops open since the 2008/9/10 revolution had actually closed their doors. I always maintained it was very few, especially given the economic climate but the list is slowly growing. Sometimes places close because they were only intended as temporary pop-ups, sometimes they were sold as people moved on in life or abroad…not all places that close are struggling. Other close just because even though a cafe might be busy, it might not make enough money to support a family, mortgage, children etc. Others leave a cafe dream to pursue another dream of course.

Penny University
Always intended as a short term project, Square Mile‘s filter coffee project in Redchurch Street rocked my world. The concept of an espresso-less coffeeshop is still one with a lot of mileage in London in my opinion. The experience at Penny University was second to none as we were were seated in front of a barista (more like sommelier) who described the coffee and its origin and characteristics and we had it brewed in front of us by methods such as (the then fashionable) siphon, V60 or Woodneck. At that time filter well done was a rarity (Monmouth pourovers, the still new Tapped and Packed and Dose Espresso aeropresses). Closed 2010.

I have fond memories of Damson on St Giles High Street which closes Friday. Sam Tonin did a great job as the head barista when they opened, serving Square Mile espresso and filter. The cakes and breakfasts were excellent and they always had a warm welcome for myself and my family. The location made for a busy cafe. Closed 2013

Taste of Bitter Love
Taste of Bitter Love didn’t close through lack of business. In fact, the force behind them went on to work for Square Mile. They were certainly one of the mainstays of the London coffee scene in their brief heyday. Gwilym’s stall was on Colombia Road and Taste of Bitter Love was around the corner. I remember the first time I went I mistakenly left without paying but made it back later that afternoon to settle the bill. The Squaremile coffee was the bees’ knees and the food was delicious. It was one of everyone’s favourite places to hang. The decor was unique too! Nowadays Esoteria make coffee in the same spot but I’ve never been impressed. Closed 2010

Salt
Queen Street was always an odd location. Both very central and not on many people’s paths through the city. Right opposite the Masonic Hall. The bread and cakes here were things of wonder – the lunches and soups too. And the coffees were not to be sniffed at either. Initially the rather unusual decision was to have Square Mile espressos and Monmouth on filter but the latter did change later. My coffees there were always very good and the people very welcoming. It’s also one of the few London coffeeshops my dad has enjoyed on a London visit. Will be much missed. Closed 2013 Greg from Salt is now at Rapha. 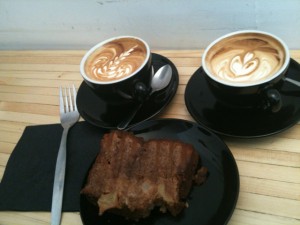 Three Little Pigs (at Black Truffle) / Cafe Panoramique
Beanbeard’s places were and are always something different…good places to hang out in intriguing locations. That now continues in his Carmelite Cafe in Bow. I never made it to Cafe Panoramique above Broadway market but Three Little Pigs was a favourite for Beanbeard’s chat and the Nude piccolos while looking around at the fashion and dress making school in the same premise. Closed 2011

Giddy Up Guildhall
Lee Harte set up the Giddy Up stalls following his experiences in cafes and at the famous Pitch 42 cart. The Floripa based cart raised expectations for brewed coffee at an outdoor stall. At first (and at its best) Guildhall did not even have an espresso machine and I would delight in supping there watching city types wander up and absent mindedly order their cappuccinos, flat whites etc and watch Lee work his magic, persuading them (so often) to try a filter coffee…and most of the time they didn’t even add milk or sugar. When the espresso machine was added to the cart it was the end of the era but it was still disappointing when the Guildhall changed things up this year and there was no longer a place for Giddy Up in that unique setting. Closed 2013

Fred and Frann
Thriving community based Stoke Newington Cafe. This place was always focussed on its superb food and cakes but the coffee was never shabby either, using Square Mile for many a delicious flat white. The owner is moving onto pastures new (Sydney) and a new cafe Esters are opening on the site.

Coming Soon Coffee
Hoi Chi was serious about coffee, so serious for saying it was almost a hobby given his other career. Matthias and he were a team and ahead of the game while also doing it differently. The focus exclusively on single origins was different as was the lever machine in the fascinating design/architecture shop near Barbican. Hoi Chi and I could talk for hours and we enjoyed tasting so many coffees there. The Londinium roasts challenged my anti-dark roast prejudices at times but I most enjoyed the special guest coffees Hoi Chi would bring in and our many fascinating discussions. Great place. Closed 2013. Exhibit design shop remains open! 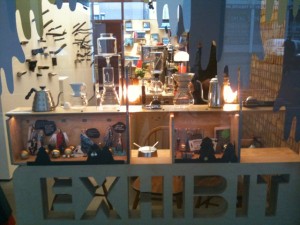 Pitch 42
Pitch 42 Whitecross Market was a pilgrimage for us back in the day of Gwilym’s disloyalty card. Lee Harte and Jeremy Challender (later of Giddy Up and Prufrock) manned the cart and all was good. Of course Pitch 42 still goes on and even still has Square Mile but I have not heard much positive about it since the heady days of Lee and Jem.

LJ Coffee House
Always welcoming and unafraid to be different, this armchair bedecked Soho hangout was a welcome change at times.
Closed 2013

Bullet
I was just talking about this place with Eric of Elliots Cafe (formerly of Flat White). Way, way back in 2008/9 there were few decent coffeeshops in London. Very few! And everywhere decent served Monmouth. Except Bullet. This tiny cafe on top floor of Snow + Rock in Covent Garden was a secret for the select few. They roasted their own coffee (now connected with the Roastery in Clapham) and it was Kiwi style and decent for its day.
Closed 2010

Climpsons and Sons Margaret Street
In ages gone by, for a very brief period, Climpsons had a little coffee cart in a stall outside a bar on Margaret Street. The first flowering of coffee in Fitzrovia? Closed 2009

Monkshood Kings Cross
It only lasted a few weeks but hinted at the future of Kings Cross coffee: Noble Espresso and Caravan. Monkshood had a dire location on top of St Pancras by the hotel which almost certainly sealed their demise but the cart was good while it lasted. Similarly the brief Kings Cross location for Weanie Beans.

Brewed Boy’s Cart
Man, you never knew when that thing would show up…it was like the Tardis. Ben is now busy over at Allpress but back in 2009/10 his Squaremile serving cart would pop up in Soho and he would regale us with his fascinating tales of the locals. Closed 2010.

Columbia Road Flower Market Stand
I never got there but Gwilym’s stall on Columbia Road was famous. He certainly served me a few times at Monmouth Borough Market at the little stall but I properly met him at Present. Columbia Road was famous and a number of great baristas went on to work there among  the flowers and plants and endlessly repeated banter and jokes from the market sellers. Over and over again.

Bambino
Church Road in Crystal Palace was a it far for a North London boy like me but I got there once. And I loved it. Ant held court making lovely coffees with a range of guest coffees and Volcano of course. It was known as a ‘hipster free zone’ and the fascinating, ramshackle antiques and treasures that filled the shop that the cafe was based in made for a unique and enriching experience. Glad I made it there.

Fernandez and Wells at St Anne’s Court
For a brief period in 2010, Fernandez and Wells’ tiny espresso bar off Wardour Street was the place to drink coffee. Featuring for a while both David Robson (Hubbard and Bell, Association, Prufrock etc) and James Bailey (Workshop, Prufrock), it served delicious coffee for a while.

The Bench at Present formerly Prufrock at Present
For a good while this was the place to catch up with Gwilym Davies. It never had a sign, the first time you went to find it you wandered aimlessly around Shoreditch High Street (actually a pastime pretty common nowadays). It was in a mens clothing and lifetyle store called Present which featured the antique ‘Golden Horn’ signage. Curated over the years by Mattias Bjorklund (photographer and former Swedish barista chmapion), it featured the Victoria Arduino lever machine won by Gwilym at the WBC.

Note: I made a few edits to the above after some helpful clarifications and observations from Gavin @FieldsBeneath