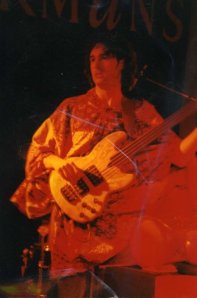 It all started pretty early. My uncle lent me a bunch of LPs in my mid-teens which included a couple of Osibisa records. My burgeoning rock/reggae/funk mindset was blown by their sound; they blended West African sounds with rock and soul in a similar manner to Santana’s Latin infused rock. And the band featured London based musicians of Ghanaian, Nigerian and Caribbean origin. Spartacus R’s pentonic basslines practically lived in my head and when I started playing bass, I played them for years. Ayiko Bia The riotous horns and freeflowing percussion tapped into my nascent jazz interest perfectly.

Next it was Fela Kuti via the radio. I recognised the strong James Brown influence in his music and later heard of the historic performances of James Brown and Santana in Accra which had brought this music (of African origin) back to Africa and hugely influenced people like Kuti and Osibisa. I found Fela’s life and style fascinating as a teenager and it was the beginning of many years listening to his music. My only wish was that one day he would learn to play the saxophone in tune. This was to haunt me later when I played in African bands and discovered that saxophonists in those bands sometimes had a unique approach to intonation!

I spent years immersed in music: Led Zep, blues, reggae, Hawkwind, Camel, Gong, Miles, Trane, Living Colour, free jazz, Mingus, Funkadelic, Bartok, Bowie being some of my infatuations and then while studying in Hull came across a small branch of a chain record store (Our Price, I think) and was drawn in for some reason when I found a whole treasure trove of new African LPs on discount sale for peanuts. I have no idea why those records were there – possibly placed by an angel for me to find? They were not even the Westernised records that appeared in the shops later, these were the real deal (mostly): Salif Keita and Super Rail Band, Youssou Ndour‘s Immigres, Mbelia Bel, Sunny Ade and others, as well as a few great compilations – I bought them all.

Then came years of discovery. I think I went to pretty much every African gig that came to Hull, and there were a few in those days and I explored music in the secondhand stores and joined bands which soaked up the sounds of soukous, highlife, mbalax and township jazz. There were so many areas to explore. I loved the South African jazz exiles like Dudu Pukwana, Chris McGregor, Johnny Dyani, Mongezi Feza, and Louis Moholo. I discovered the sounds of Thomas Mapfumo and delved deep into juju, highlife and fuji music while enjoying the African reggae of stars like Alpha Blondy.

I saw griots like Toumani Diabati and had a special affection for Youssou Ndour’s band. What I didn’t realise back then was the influence that Afro-Cuban music had had on all these guys. Later playing rumba with Fante lyrics in a Ghanaian band I was made fully aware of the links. Later on I explored Egyptian music and Algerian Rai – a major fascination of mine. I saw a lot of soukous bands too. Moving to London I suddenly had the world on my doorstep too – some great nights at the Africa Centre and elsewhere.

London also allowed me to study African music. I studied West African (specifically Ghanaian) music while at Goldsmiths doing Community Music and I spent a year or two studying percussion with Adesose Wallace as well as teaching percussion to kids. I loved how Ade taught us by singing each of the percussion parts, never starting any of the rhythms on ‘the one’ – each instrument began its pattern on a different beat but ours ears taught us how they interlocked. Eventually we learned to improvise in this context without losing our place, I’d recommend it to any musician.

OK, the next chapter was playing with London based Ghanaian musician Paapa Mensah in his bands for a few years, touring around the UK and recording an album ‘Around the World in 48 Minutes’. I’m very grateful to the guys in that band, especially Paapa, and I learned so much with them, At times, I wish I was as accomplished a bassist when I played in that band as I am now but that’s silly because it was a learning experience that led to the musician that I am today.

One of the coolest things (apart from the general camaraderie) was the way we could play music from all over Africa and blend it with the band’s Ghanaian sound…we also had great musicians in that band from all over the world: Ghana, England, Barbados, Nigeria, Ivory Coast, Zambia, Bangladesh, Israel etc. Even the first gig I did with them had dancers, a percussion section, backing singers, horns ….oh yeah!

Since then I haven’t played explicitly African music but it’s always there as an influence. I did spend some time attempting to form a Rai/Salsa fusion band but it never came off. I still spend my time listening to Baaba Maal and the like and I discovered Cameroonian superstars like Richard Bona, as well as Ethiopian music and Tinariwen and absorbed myself in the music of the African diaspora: jazz, funk, soul, reggae, Afro-Cuban, Brazilian styles and so on…it’s all African innit!