I miss him so: Joe, who passed away in September 2007 soon after his beloved wife. He has been suffering from a rare form of skin cancer. He was 75 when he died. I used to think that was old, but the energy he put into the gig he saw him perform earlier that same year at the Jazz Cafe in London demonstrated just how young 75 can be sometimes. It had been a stunning gig. I was completely blown away with Zawinul’s band featuring Linley Marthe and Paco Sery: the groove from the first note was the deepest I had ever experienced and the music the most spiritual and the most exciting – so great to be stood feet from the stage.
Earlier I had been sat in the bar with my friend Davo; and Joe had come into the bar for a swift drink. He sat alone. We considered approaching him and having a conversation but something made us stop…we exchanged knowing nods with him and a look that spoke volumes and that was enough for me. I don’t know what words I would have spoken anyway. 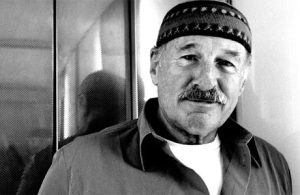 Here are some words I wrote after the gig:

On a few tunes, the band started from the first beat with the kind of intense groove that most great bands reach at the peak of their performances and then built from there.

I was impressed at the way Joe integrated his voice and the many voices into the fabric of the music. It’s something he has been trying to do for years and seems to have finally achieved an integration of voice and music that is unique and incredibly powerful. Joe was very playful in his use of keyboard voices – was that a sample of Sabine’s voice he was playing on the keyboard at some point. Did you see the ecstasy on the musicians’ faces.

Joe had a kind of Duke Ellington role but obviously played a lot more than Duke did in his orchestra. It was like Duke’s band or the Bitches Brew sessions but from an entirely different universe. Joe conducted events and brought voices in and out and cued the stunning unison riffs. I found his playing a lot more melodic and vital than I have heard for a long time. I loved the sound of his voice whether through the vocoder like device or simply speaking or singing.”

I think I first heard Joe on either Black Market or Bitches Brew. He was such a huge influence from the very first. Black Market was the first Weather Report album I’d bought and remains a favourite..fabulous writing from Joe and Wayne Shorter and such an incredible band. Bitches Brew was Miles Davis’ fusion masterpiece and he allegedly hired Joe for the sessions to write basslines. Joe had one of the greatest bass conceptions I ever heard. His compositional style mixed folk-like and ethnic pentatonic influences, deep funk, complex harmony and one of the greatest rhythmic conceptions ever. Listen to how a track like Nubian Sundance on Mysterious Traveller seems to bend time and create an unreal momentum. He also had an ear for fabulous sonic invention and was always one of the most creative users of synthesisers.

He had an ear for fabulous bassplayers too: look at the list of the guys he worked with. Most of all though, Weather Report redefined jazz, creating music that always had an architecture and soundscape way beyond a stream of solos. In his later solo work, Zawinul explored the use of the voice on a range of records – finally integrating the voice in his music and blending his rhythmic intensity with a rediscovered melodic sensibility just before his death.

I actually (briefly) considered giving up music while at that London gig. My feelings that way were not born of disillusionment with my own playing – more like a sense of incredible musical satistfaction from hearing that band play – there was no need for anything else – and realising that, great as some of my musical experiences have been, that band was coming from a different plane.

I highly recommend In a Silent Way by Brian Glasser, such a fabulous biography and such an incredible life; and I recommend Zawinulonline.org as a fabulous online resource. I recently came across an annotated Weather Report discography at this site.

My personal favourite records (apolgise for the lack of recommendations of Cannonball’s great band with Joe, I’m not too familiar with the records (there’s a project!) :