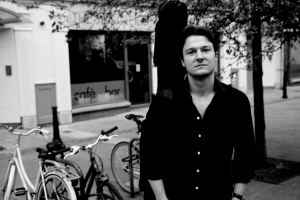 I was delighted to hear Maciek Pysz’s new trio at Charlie Wright’s last night. Polish born Maciek composes the beautiful, melodic music that the band plays and leads on acoustic guitar. The new line-up features the renowned drummer Asaf Sirkis and upright bassist Mao Yamada. The pair are a wonderful foil to Maciek’s melodic flights, keen rhythmic sensibility and awareness of the power of dynamics.
The tunes range in tempo but often started quietly as the trio probed the music and explored the nuances of the tunes before building to some great moments of intensity. Asaf Sirkis’ skittering drums melded well with Pysz’s guitar and Mao Yamada played an important role of generally adding understated and subtle lines that worked as a adhesive for the trio’s music. A tad too quiet in the mix, Yamada varied his approach from deep whole-note cushions to mobile melodic lines to some impressive arco work. Whatever he played was simple and elegant.

Sirkis’ playing was playful and sensitive. Several of his rolling solos (often accompanied by Pysz’s rhythmic guitar) had the audience in raptures and his playing is a constant delight on the London scene. Catch him next Thursday at the 606 club with guitarist Mike Outram and saxophonist Tim Garland! Sirkis made excellent use of the colours of his drum kit as the band combined to explore the tunes while maintaining the unique mood of each piece. Pysz, in particular has a great knack of blurring the line between composition and improvisation and the pieces built organically from their opening melodies.

Maciek Pysz’s playing ranges from lucid melodic picking to rapid single notes to intense strumming to touches of flamenco influenced guitar. He plays everything like he means it and plays with an impressive nimble precision and awareness of the whole sonic picture of his often cinematic tunes. Influence wise I heard Chick Corea, Al di Meola, Avishai Cohen and others in the composing and playing but Maciek is very much his own man and the trio are making their mark with very much their own music. I must pay my respects here to the warm atmosphere at the venue and the appreciative audience.

Great gig. The Maciek Pysz trio is one to watch!

The gig was also featured on Polish TV